By continuing to browse this site, you accept the use of cookies. Find out more OK

The Abbey of Châtres located near the village of Saint-Brice (Charente) is a Roman style abbey built in the 12th century whose history and architecture are rich, different and mysterious.

Its architecture is characterized by two very significant elements. First, a facade with a very beautiful poly-lobed gate.

The façade has 3 levels with 3 then 5 and finally 9 arcades framed by two columns. The very fine and elegant sculptures are mostly based on acanthus flowers. Another significant element: inside a row of 4 domes on pendentives such as are very rarely seen in Charente.

One is surprised by the contrast between the exterior of the abbey, all in finesse and elegance, and the nudity of the interior

Roman style abbey from the 2nd half of the 12th century.

Unique and mysterious site due to its location in a small valley away from any dwelling. It has been occupied for 4 centuries by a community of regular canons of the order of Saint Augustin. From 1568, during the 2nd war of religion, the community disperses ; there will never be any more monks in Châtres. Was it during the 100 years war or was it during the 2nd war of religion in 1567-68 that the abbey of châtres then suffered great damages, with regard to the cloister and the conventual buildings which have been destroyed and with regard to the north transept which was partially collapsed. During the revolution in 1795 the abbey was sold to an individual as national property and then transformed into a porcelain workshop. The porcelain workshop will cease its activity in 1825. The abbey will then be transformed into a barn and will house farmers. At the end of the war it was badly degraded, the roof was almost non-existent. Châtres was classified as a historic monument on August 24, 1948. Its restoration then began. Since its classification there have been 6 stages of restoration with the participation of the DRAC, the support of the departmental council, the support of the Heritage Foundation. The abbey was selected in 2018 by the BERN mission and thus received the support of the heritage lotto. 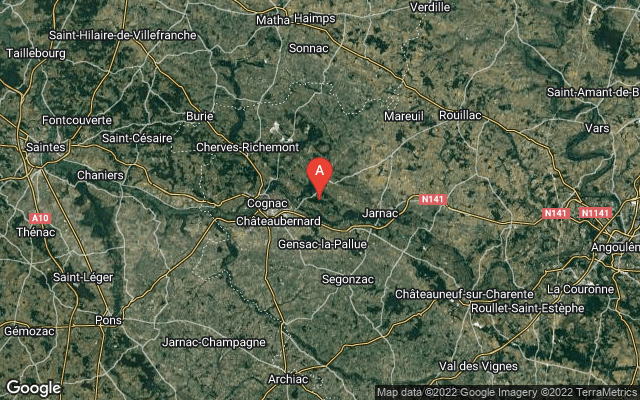 Visits of Châtres : when the abbey can be visited ?

1/ During the tourist season which runs from July 1 to September 30.

In 2022 the abbey of Châtres will be open every Tuesday, Thursday, Saturday in the time slots shown in the attached table

2/ Outside the tourist season, i.e. from October 1 to June 30, on prior request to be expressed at least 3 weeks in advance

Visits are made by members of the Association of Friends of the Abbey of Châtres. Volunteer members who know the abbey of Châtres and will thus be able to transmit their passion without obscuring the "grey areas" and the mysteries which surround the history and the architecture of Châtres

History of the abbey of Châtres

The destruction of the archives of the Abbey during the Wars of Religion leaves us unable to establish the precise date on which the Abbey was founded. The Gallia Christiana, a 17th century text listing all the churches in France, only tells us that an abbey was created on this site when Arnaud Taillefer was Count of Angoulême, that is between 975 and 1001. The original church, wooden and modest, was replaced in the twelfth century by the current larger abbey made of stone. It was occupied from the beginning of the 12th century by a community of regular canons of Saint Augustin. At that time, a cloister stood to the south of the abbey church. The convent buildings were attached to the south transept with the chapter house, the lime kiln, the refectory and the cellar. Upstairs was the monks' dormitory. The canons met every day in the chapter house where a canon read aloud a chapter of the rule of the order. The spiritual prestige enjoyed by Châtres in the eyes of the faithful should not make us forget its mportance in the local economy. Like all the abbeys, it was at the head of a vast agricultural estate from which it drew most of its resources: vines, fields of wheat intended for immediate consumption, but also for sale, and which constituted a source of income for the canons.

The 100 Years War, however, marked the end of this prosperous period. The region remained a stake in the conflict between the kingdoms of France and England until the end of hostilities in 1453. During the 1360s, the Abbey of Châtres was ransacked, and its roman apse destroyed. However, the revival of Châtres proved difficult. The community of canons who had left Châtres in the 1360s moved back to Châtres at the beginning of the 15th century. The Abbey resumes its activity. Jean d'Orléans, Count of Angoulême, brother of the poet Charles d'Orléans, had a Gothic chancel rebuilt.

From the time of François 1er, Châtres became a royal abbey: the abbot was no longer elected by the united canons, but appointed by the king. We then speak of a commendatory abbot. The 16th century saw the end of religious unity within the Christian West. The Charente, which maintained important economic and cultural relations with England and Northern Europe, became one of the great centers of protestant reform in France.

Thus when the First War of Religion broke out in 1562, the Charente was the scene of numerous clashes between the two camps. From the start of the conflict, many churches were ransacked. This is the case of the abbey of Châtres as well as its conventual buildings and the north arm of the transept, which were all destroyed.

In 1789, the Revolution broke out. Faced with great financial needs, the Constituent Assembly decreed on November 2, 1789 the confiscation of the property of the clergy for the benefit of the Nation. In 1795 the abbey of Châtres was sold to a private individual living nearby and thus became private property. It then housed a porcelain factory until 1825 and was then transformed into a barn. At the start of the 20th century, Châtres was in a very dilapidated state. The roof was almost destroyed, ivy grew in abundance on the sides of the abbey.

The rehabilitation began on March 19, 1948, when the Abbey of Châtres was classified as a Historic Monument.

Since then there have been stages of restoration:

. the windows of the flat chevet in the

. and finally the remains of the north transept and the abbot's chapel in 2020.

Architecture of the abbey of Châtres

As most churches in France and following the Latin tradition, the abbey of Châtres was designed like a cross. The nave (or centre aisle) leads straight to the choir. While the South transept was restored the North one remains partially in ruins. Conforming to tradition, the abbey faces the North West and South East with the choir oriented towards Jerusalem. The monument goes back to the Romanesque era. This style became widely known in both of the Charentes where many similar churches were erected in the 11th and 12th centuries. The Châtres abbey stands out with its monumental and richly adorned facade dating from the last quarter of the 12th century. This exceptionally high three-story facade offers a great number of arcades. Two column- shaped buttresses and cornices prop the edifice. At the first level one notices a portal with a polylobed arch between two blind arcades.

At the second and third level one can notice a growing number of arcatures. Save the six human figures standing on the left side of the facade, the vast majority of the architectural decoration are plant motifs essentially the acanthus flower. The acanthus symbolizes resilience and fortitude. On the second level it is worth admiring the shafts of two small columns delicately adorned with geometric patterns of pearled inlays.

At the top of the left buttress, two human-like faces peek out of the foliage. This was not an uncommon feature in the late period of the Saintonge style. In most decorations the overall impression is that of subtle refinement and care. While the North arm of the transept was destroyed, the South one remains standing and was fully restored in 2018 not omitting the absidiole on the East side.

Unfortunately, the church-tower was fully destroyed during the wars of Religion and nothing remains of the old cloisters. The vastness of the church and sobriety of the facade are in deep contrast.

The will of the architects seemed to have focused essentially on the harmony of the lay-out.

The nave stretches over three bays. Similar to the cathedral of Angoulême, the monks had the nave covered with a row of pendentive cupolas : three follow one another, followed by a fourth, larger one, at the crossroads of the transept. The latter is decorated with sawtooth and diamond point archivolts. This architectural fashion started in Périgord and was probably inspired by the Byzantine style.

The association of friends of the abbey of Châtres
The association was founded in July 2013. Its statutes stipulate that the purpose of the association is to initiate, support and encourage any project intended for the cultural and religious animation of the Abbey of Châtres, in a spirit of sharing and exchange, in order to contribute to its influence and safeguard.
The association has currently more than 100 members.
It has done a lot of work in recent years on 3 essential fronts:
1/ Visits to the abbey
They happen all year round but are spread out mostly during the legal opening
period, namely 3 days a week throughout the summer season between July 1 and
September 30.
Voluntary members of the association ensure the visits in turn. They speak of the
abbey with their hearts, highlighting the beauties of the monument, also conjuring up
the many mysteries of Châtres.
2/ Cultural or religious events
Many visitors are welcomed to Châtres for concerts, conferences, masses,
and during the various events organized annually for “Heritage Days” (3rd weekend of
September).
3/ Embellishment of the surroundings
A focus since the beginning of 2022, efforts have led to:
. the plantation of an orchard with 12 fruit trees,
. the creation of the cloister garden located on the site of the old cloister with to name
just a few: cosmos, Zinnias, Anethums,
. the establishment of a garden of “medicinal plants” where one can find: sage, dill,
nigelia damascéna, matricaria…
The main objective of the association is to promote the image of the abbey and to ensure it becomes better known and appreciated.
.
Les restaurations de l'abbaye de Châtres

Since the abbey of Châtres was classified as a historic monument in August 1948 there have been 6 stages of restoration:

- the 3rd phase took place in 2013: shoring of the so-called "abbot's chapel" to the east of the abbey church

- the 4th stage concerned the main facade (western) of which many sculptures have been restored, whose cornices and eaves have been protected to prevent any water infiltration. A new solid oak gate has been installed at the entrance of the monument, it is in the style of the gate of the Poitiers cathedral

- 5th stage in 2018: restoration of the south transept and the apsidiole which threatened to collapse in the long term. Possible collapse due to the fact that up to the XVI th century the conventual buildings were attached to the transept and that after their disparition there were potentially dangerous side thrusts. The monks' door has been drilled with the installation of a solid oak door

- 6th installment in 2020: restoration of the north transept (consolidation) and the abbot's chapel and installation of a waterproof roof to prevent rainwater from infiltrating